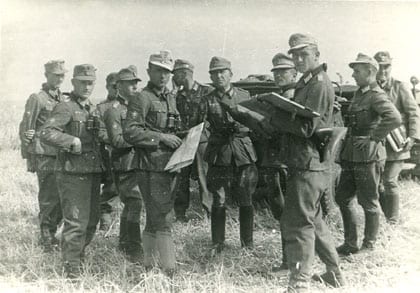 Although WWII began in 1939 operations in which the German Wehrmacht took part (albeit without firing a shot) actually began in 1935 with the military march into the Saarland after the successful plebiscite that reunited the Saar region with Germany. Later in March of 1936, the Rhineland demilitarized zone was reoccupied by German troops in a move that was the first in Hitler’s “flower wars”. In 1938 the Wehrmacht took part in the incorporation of Austria into the greater Reich, and later in the occupation of the Sudetenland. In 1939 German forces took part in the occupation of the remainder of Czechoslovakia. German forces occupied Memel in March of 1939 in the last major operation in which German troops took part before WWII began. In addition to the above operations, German forces also took part in the Spanish Civil War between 1936 and 1939.

World War II officially began three days after German forces burst across their eastern frontier into Polish territory on September 1st, 1939, and Western Powers refused to accept German claims and declared war. Regardless, in less than 1 month the lighting campaign against Poland was over.

After a brief lull in ground operations in Europe the Wehrmacht attacked Denmark and Norway in April of 1940, and the Low Countries and France one month later in May. After the defeat of France, the Wehrmacht shifted its focus again to the east, this time to the region of Yugoslavia and the Balkans in April 1941 where it smashed the Allies in yet another lightning campaign ending with the capture of the strategic island of Crete in the Mediterranean Sea.

In June of 1941, the Wehrmacht launched the largest invasion in history with its attack on the Soviet Union. At the same time, Wehrmacht forces were already taking part in operations in North Africa, only to end later in May 1943 when they were swept from North Africa and slowly pushed up the coast of the Italian mainland.

In June of 1944, the Allies landed in France and began a campaign that would take them to the Rhine River and beyond, while on the Eastern Front the Soviets pushed into German itself, finally crushing the Axis powers in May 1945 after six long years of harsh and brutal conflict, the worst and most tragic conflict humankind has ever witnessed.

The basis for Feldgrau lays within our unit histories. In this section, you will find all units documented to one degree or another. The many gaps in these listings will be filled during the coming months and years as additional research aids completing this monumental reference tool.

Unit histories are but one source for information on the German armed forces. Another vital source that can provide personal
observations and unique perspectives that unit histories usually can not are veteran accounts.

Before embarking on any study of German unit histories it’s helpful to have access to research material regarding ranks, formations, terms and other related
concepts.

If you have a question about a concept or something specific, you can post a message in our German Armed Forces Forum.